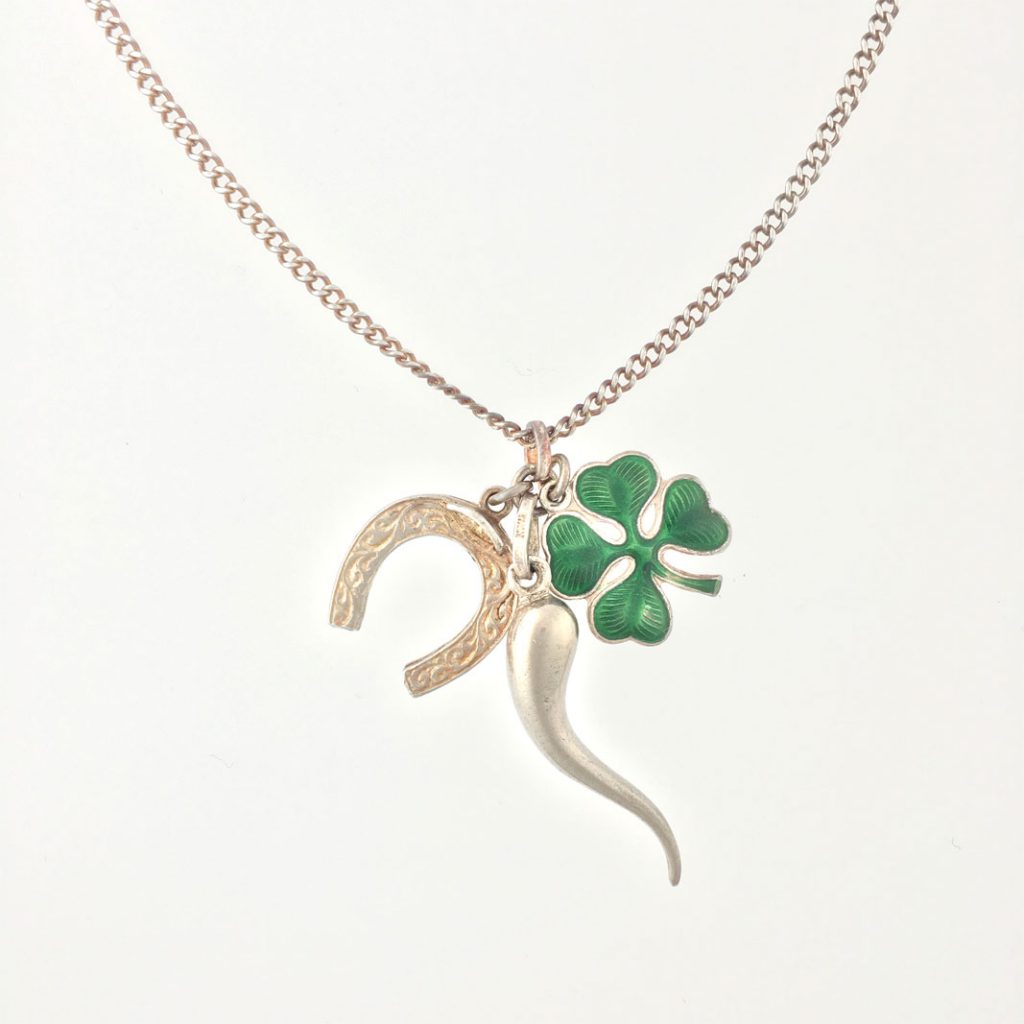 A combination of
these charms must
be extra powerful 🙂

200 years before Christ, the Celtic Druids who lived in ancient England considered the four-leaf clover sacred because of its rarity. Irish legends and writings of Julius Caesar say that four leaf clovers gave their possessor the gift to perceive the presence of demons. But on the other side of the world, in China, people were also already looking for four leaf clovers to bring luck.

The horseshoe is probably one of the most well-known good luck symbols of the Western world. The story goes that the devil asked the blacksmith to attach horseshoes to his hooved feet. The blacksmith did as he was told. However, it caused the devil a lot of pain. The blacksmith would only remove them if the devil promised never to enter a home where there was a horseshoe hanging. But the horseshoe is also quite common in Egyptian iconography and known in Islamic art.

An Italian horn, as an amulet and a talisman, is used abundantly across Italy. But also in the United States among the descendants of Italian immigrants. Known in Italy as the cornicello, cornetto, or simply corno, it is worn as a protective tool against bad omens and evil.

Ladybugs are generally symbolic of positivity, good luck, and flourishing love. During the Middle Ages it was common belief that the ladybug symbolized protection. Stories were told about farmers who were desperate because aphids were ruining their crops. The farmers prayed to the Virgin Mary for help and she responded by sending ladybugs to annihilate the aphids.

The wishbone tradition dates back to the ancient Romans, who believed it was good luck to pull apart chicken clavicles. In the 16th century, the English adopted these Roman beliefs. The Pilgrims brought the tradition to America. In its intact form, the wishbone itself does not confer good luck. However, it holds the promise of luck to the one who gets the longer half. The saying “Get a lucky break” comes from this tradition.

The Hamsa Hand is an ancient Middle Eastern amulet symbolizing the Hand of God. In all faiths it is a protective sign. It brings its owner happiness, luck, health, and good fortune. The hamsa hand sometimes includes an evil eye symbol, which is thought to protect against the evil eye.

I used some other charms in the Lucky Charm Necklaces. Dice for instance are considered to be lucky as well as a genie lamp (rub to make three wishes). And the heart provides protection in all matters related to personal contacts and an effective life. It helps us to have good fortune in love.

The chain used in the Lucky series can be worn independently from the charms and are decorated with a little four leaf clover. This is where two shorter vintage chains have been attached to make a longer one. Each Lucky Charm Necklace is unique and numbered.

Polish the necklace gently with the polishing cloth that is packaged with the Lucky Necklace if it is tarnished. Or soak in hot water with dish-washing liquid if dull and greasy to restore it’s beauty.
Do not polish with silver polish or use silver dip if you do not want to loose the patina in the indentations that give the charms their “depth” and, uh, charm.